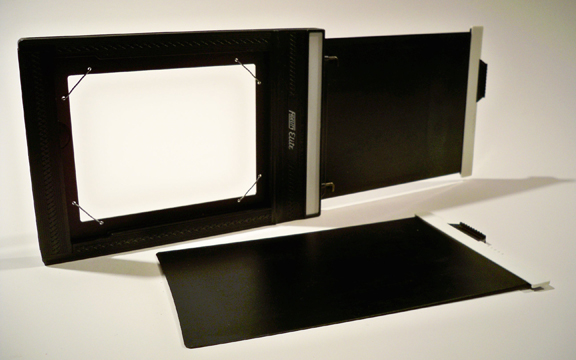 Most modern view cameras use a standardized cut (sheet) film holder. These are designed to hold two sheets of film, one on each side of the holder. These standardized sheet film holders must be modified by removing a portion of the septum that separates the front and back sides of the film holder before using them to shoot tintypes or glass negatives. The size of the opening in the septum determines the size of the plate that can then be used with that film holder.

To keep the plate from falling completely through the opening in the septum, supporting wires are then placed across each corner of the opening to hold the sensitized surface of the plate at the same location as the original sheet film. When loading a sensitized plate into the modified sheet film holder, begin by removing the rear dark slide (We mark the front of our modified film holders with a label indicating "This Side Toward Lens". Leave the front dark slide in the film holder). Lay the modified film holder on a bench top with the open side facing up. Next, lay the surface of the plate that has been coated with collodion into the septum opening so that the collodion surface rests on the supporting wires. (collodion side down) Place a small plastic spring, which can be a folded strip of soda bottle plastic, or anything similar, onto the back of the plate. Hold this spring in place with a finger while sliding the dark slide into position over the rear of the plate. This dark slide holds the spring in place and keeps the plate from falling backward when the film holder is handled and while loading and unloading it in the view camera.

Because this method of holding a sensitized plate in the film holder places the sensitized photographic surface at the focal plane, the thickness of the plate is of no consequence. You can use a film holder modified in this manner to shoot tintypes or glass negatives of any thickness as long as they will fit beneath the rear dark slide.